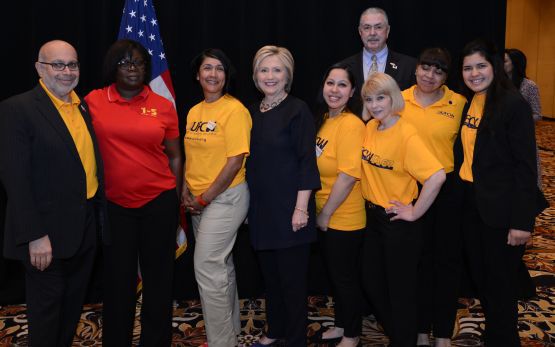 Today, in Las Vegas, Democratic Presidential candidate Hillary Clinton met with hard-working retail workers from across the industry at the UFCW Political and Legislative Conference. Clinton discussed the issues impacting them, their families, and co-workers.  During the meeting, the workers talked about their day-to-day challenges, including workplace intimidation, scheduling and unpredictable hours.

She also took the time to talk with RWDSU Local 1-S members from Macy’s in New York, who are involved in difficult negotiations and have authorized a strike if a fair contract cannot be reached by June 15. They discussed the unfair demands being made by Macy’s management, and she offered her their support.

Along with Macy’s workers, Clinton met with employees from Albertson’s, El Super and Stater Bros.