New York Times: Macy’s and Union Have a Deal, Averting a Strike 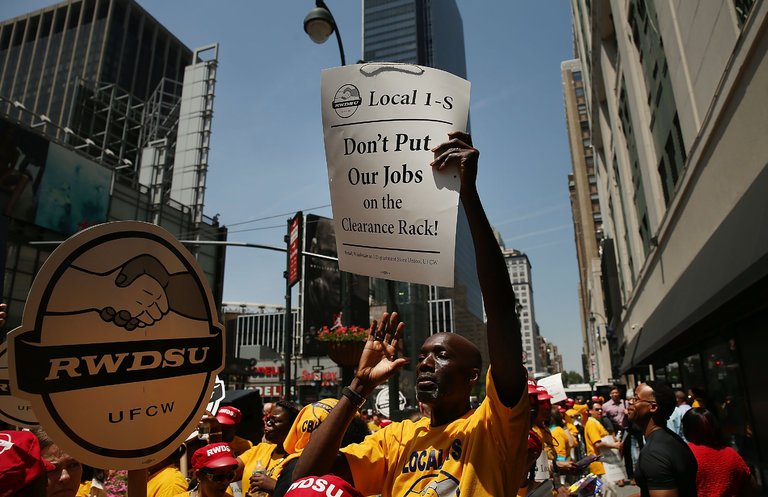 The following story appeared in the New York Times.

Macy’s and the union representing thousands of its workers in the New York City area reached a tentative deal for a new labor contract on Thursday, avoiding what would have been the first strike at the nation’s largest department store in more than 40 years.

The president of the union hailed the four-year agreement as a “major victory” that included “substantial wage increases,” a more affordable health care plan and new scheduling rules that would not require employees to work on holidays, including Thanksgiving and Christmas.

“It raises the bar for what retail jobs can be and should be,” said the union’s president, Stuart Appelbaum. “It’s a major step forward for the entire retail industry, and it shows the importance of what our union does to empower retail workers.”

A Macy’s spokeswoman, Elina Kazan, said, “We are pleased with the outcome of our overnight negotiations.”

Macy’s and union leaders initially had until midnight Wednesday to agree on a new contract for workers at four locations in New York State, including the retailer’s flagship location in Manhattan. Talks extended beyond the deadline.

The price of health care coverage was one of the most important issues to labor organizers, said Mr. Appelbaum, who leads the Retail, Wholesale and Department Store Union, in an interview on Wednesday. He said more than three-quarters of Macy’s employees could not afford the retailer’s health insurance.

“The premiums are just too high for people,” said Mr. Appelbaum, who added that the deductible was $3,000 for an individual worker and $6,000 for a family.

The union also pushed for changes to the Macy’s commissions policy. In particular, union leaders wanted Macy’s to shrink the window during which returns of merchandise could reduce an employee’s paycheck. Under the current policy, any merchandise returned within six months can count against a worker’s sales, which are used to calculate commissions. A spike in returns over the last few years has made the issue more urgent, labor officials say.

There were no significant changes to the commission policy, according to a spokeswoman for the union, Janna Pea.

The union said it expected its workers to ratify the deal within a week.

The previous labor contract — covering nearly 5,000 employees, including sales representatives, cleaning staff and stock room workers — expired on May 1. Within weeks, workers at Macy’s stores in Manhattan, the Bronx, Queens and White Plains voted to authorize a strike if a new deal could not be reached by Wednesday.

Macy’s workers have not gone on strike in New York since 1972, according to Mr. Appelbaum.

While labor negotiations often come down to the final hours, Macy’s had shown signs that it took the threat of a strike seriously. The retailer placed ads seeking new employees, which Mr. Appelbaum viewed as a strategy to scare workers into thinking they could lose their jobs.

Ms. Kazan said in a previous email that the company had taken out similar ads during contract talks in the past and that it was a “practical solution” to be prepared in case of a strike.

Traditional department stores have struggled more than the rest of the retail industry to recover from the 2008 financial collapse.

Macy’s, Nordstrom, Kohl’s and J. C. Penney all reported weak sales last quarter. Department stores as a whole employed 1.3 million workers as of May, the smallest number in a decade and 10 percent fewer than in 2009, according to the Bureau of Labor Statistics. Discount department stores like T. J. Maxx, Marshalls and Ross, on the other hand, have been thriving.

The retail industry as a whole employed 15.9 million people as of May, up more than 9 percent since 2009.