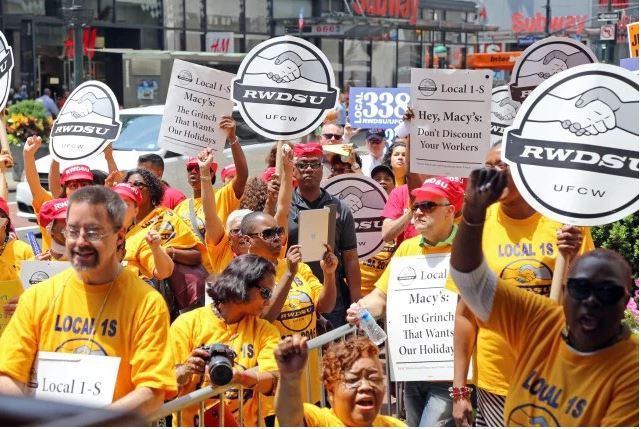 NEW YORK — Union leaders and labor groups from as far as Alabama on Thursday joined Local 1S of the Retail Wholesale and Department Store Union at Macy’s Herald Square flagship for a rally in support of wage increases and affordable benefits for the 5,000 workers covered by the three-year contract, which expired on May 1. Since the expiration date, bargaining has continued as part of a 45-day extension period.

“Macy’s looks at workers as an expense, not an asset,” said Ken Bordieri, president of Local 1S. “Macy’s wants people who work on commission to work 75 minutes per day without getting paid, and we want the right to opt out of working on holidays. Company-sponsored health care is unaffordable. We took our strike vote and have authorization, if necessary. Our members want a good contract.”

Union leaders said the cost of health benefits for a single person is $75.

The rally was held on the 34th Street side of the flagship on the sidewalk. Customers entering or leaving the store had to squeeze by union members wearing yellow T-shirts. Beneath a banner that said, “Macy’s Don’t Discount Your Workers,” a band made up of union members sang Aretha Franklin’s “Respect” and changed the words to Amy Winehouse’s “Rehab” to “Trying to take our holidays. We say, no, no, no.”

“We are currently renegotiating our labor contract with the RWDSU which affects store employees at four of our New York City-metro stores including Herald Square, Queens Center, Parkchester and White Plains,” the retailer said. “Macy’s is committed to bargaining in good faith, discussing all of the issues at the bargaining table and working towards reaching an agreement before the June 15th deadline.  Today’s rally or any plans for calls to strike by the union are an expected and standard part of the negotiation process.”

Later, Bordieri told the audience, which was estimated to be in the hundreds, “Mr. Lundgren [chairman and chief executive officer of Macy’s Inc.], can take his family on vacation on a private jet and doesn’t give you a good enough wage so you can take your family to McDonald’s for dinner.”

Deserine Morrison, a sales specialist and 34-year Macy’s veteran, said, “I have a pension, but people coming up behind me don’t. We have to think of them. I love my job. Macy’s used to be a friendly place. We would come in every day and make magic here. It broke my heart to see the changes.”

Joan Solomon, an employee of Macy’s for 24 years, said, “The salaries are not able to pay for medical benefits,” she said. “It’s a shame. We work for a big company.”

“We work in places like Zara, H&M and Modell’s,” said Gemma deLeon, president of Local 1102 of the RWDSU. “Macy’s sets the standards for so many other retail workers.”